Description The Late Assyrian Empire c. The Architecture of Late Assyrian Royal Palaces is the first volume to provide an in-depth analysis of Late Assyrian palatial architecture, offering a general introduction to all key royal palaces in the major centres of the empire: Assur, Kalhu, Dur-Sharruken, and Nineveh. Where previous research has often focused on the duality between public and private realms, this volume redefines the cultural principles governing these palaces and proposes a new historical framework, analysing the spatial organization of the palace community which placed the king front and centre.

It brings together the architecture of such palaces as currently understood within the broader framework of textual and art-historical sources, and argues that architectural changes were guided by a need to accommodate ever larger groups as the empire grew in size. This new typology should not be used too rigidly. Some suites share aspects of different types and several suites appear to be unique. Such suites indicate that the heterogeneity is greater than our typology would suggest.

The similarity between palaces and the tradition in the architecture of suites is certainly not random and must correlate, at least to some extent, to a consistency in use.

The suite was two-sided and could be entered from the main forecourt i. A strong hierarchical difference existed between the two sides, with the throneroom clearly forming the front of the suite. The two-sidedness did allow the throneroom to be entered from the back. Such back entries were rare in the other suites, which usually only possessed a frontal way of entering. The arrangement seen in the Throneroom Suite was not exclusive to the king. Most elite residences, especially those from Dur-Sharruken Loud and Altman , possessed a similar set of rooms. The suite is defined by its two-sidedness, which allowed its two reception rooms to be accessed from two directions.

Though its two sides are comparable, their place within the palace created differences in accessibility.

The bathroom usually takes up one-third of this core. The absolute and relative size of these bathrooms is remarkable and might from our perspective seem like a waste of precious space, but it was clearly an essential and important room. This core probably represents the minimum requirements to be able to talk of a residential suite. It could be enlarged to create more monumental suites. 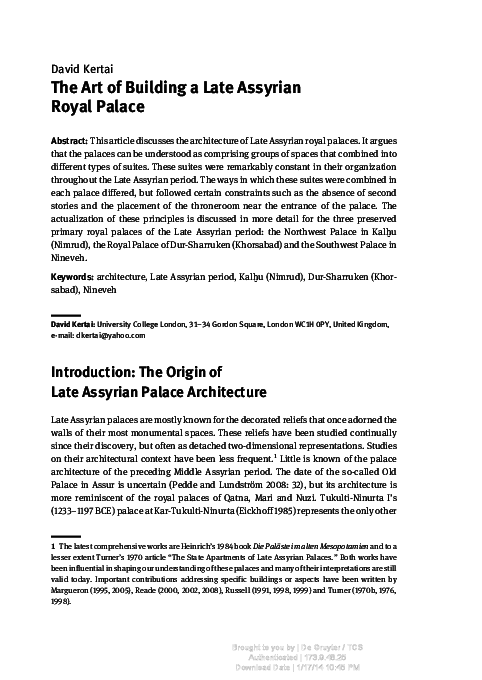 It is doubtful whether suites without a bathroom had residential uses. Single rooms are usually better understood as storage spaces. We should certainly be cautious in using the word residential. First, we do not know the exact uses of spaces, in part because their original furnishing has not been preserved. Second, it is unlikely that pure bedrooms existed.

We should assume that most spaces were multifunctional.


The more monumental suites clearly served as spaces for receptions and other court activity, possessing reliefs, elaborate wall paint- ings, tram-rails, etc. Nonetheless, one can argue that it is this type of suite that was most suitable for sleeping regardless of the other uses it might also have possessed. Whether this type of suite can be called residential is probably partly dependent on its location. Suites located in the most accessible parts of the palace are more likely to have formed the office of palace functionaries and are less likely to have been residen- tial in nature.

Many officials will have worked on a daily basis within the palace.

The more important among them appear to have possessed their own offices. One of the most common and monumental offices was located in the corner of the Throneroom Courtyard, often close to the main entrance. Their similarity is remarkable, especially if one considers the considerable changes in the architecture between both palaces. The architecture of the suite in the Northwest Palace was typical for that palace. The suite of the Southwest Palace was, however, unique within the palace precisely because it was so similar to the suite of the Northwest Palace.

Their locations within the palace were comparable. Their inventories and possible installa- tions are unknown. They are always located next to the monumental suites, set apart and closely con- nected to the outside. The small size of their rooms and their location in the center of the palace seems to make them quite suitable for service functions such as kitchens, which are otherwise lacking. It consisted of two central rooms of similar length, with the internal room often being somewhat less wide, surrounded by different kinds of spaces.

The agglutinative nature of Late Assyrian suites is especially pronounced in these suites, which could possess an especially high number of attachments. They became common in later royal palaces. Most such suites were found in the Southwest Palace of Nineveh, which contained at least five suites of this type. In the more monumental Dual-Core Suites, large rooms were placed perpendicular to the central ones, basically expand- ing the core with one or two additional rooms.

This type of suite does not so much represent a functional category, but rather a changed architectural idiom. It coincided with the emergence of a set of interrelated architectural features that transformed the functioning of Late Assyrian palatial spaces.

These changes can be summarized as an increased fluidity of the internal space. This was achieved by increasing the number of internal doors, aligning them with those on the outside and, if present, with those further inside.


These internal doors were often wider than the internal doors in earlier palaces. The increased fluidity and monumentality of the interior did not 7 1 rooms 9 and 10, 2 rooms 24—27, 3 rooms 29—41; 4 rooms 51s; 5 rooms 65— Drawn by author. Even though the suite was more permeable, with the aligned doors creating visual axes from the outside, the external facades were as closed as they had been throughout the Late Assyrian period.

This suite can alternatively be interpreted as a rearranged Double-Sided Reception Suite, whose two reception rooms are joined. This removed the double-sidedness and forced the attached rooms to surround the core. The consistency of having two recep- tion rooms in one suite seems noteworthy.

If functionally significant, it would suggest that the two rooms of the Double-Sided Reception Suite were intended to be used simultaneously, at least sometimes. Both types of suites could accommodate a similar amount of people, but played out the related hierarchies of distance differently. Making a Palace from the Available Suites It is sometimes assumed that the Assyrian king was inaccessible and located deep inside his own palace see, for example, Grayson 10; Parpola The throneroom, the preeminent room of the king, was always the first state apartment encountered when entering the palace.

It meant that the royal throne was only one door away from the most accessible part of the palace. Being near does not necessarily represent an ease of access, but it is clearly not a sign of seclusion. The throneroom can be understood as embodying a closeness to the king, regardless of his physical presence.

The most monumental suite of this type, and thus most likely to have belonged to the king, was the first such suite to be encountered. The palaces are typically thought to have been divided into a public and a private realm.

There are two problems with this assumed duality. First, the duality is absent from the Late Assyrian textual sources, making it a modern construct. Attestations of the Akkadian terms can best be understood as referring to the inside and outside of the palace Kertai, forthcoming b. Second, the existence of private and public spaces or zones seems doubtful.

These are modern concepts whose heuristic value when describing the Late Assyrian period is dubious. Viewing space through the lens of zoning represents a Modernist approach. It forms an unnecessary layer in the spatial analysis of these palaces. Spatial analyses are best done on the level of the suites. Late Assyrian palaces can be described as a combination of independent suites that were pavilion-like in their organization. They were, however, not articulated as such.

Visually, the different suites were all integrated within the larger palace. Most suites were accessible from a courtyard and could only be entered from one side. One did not need to pass through one suite to reach another suite. This independence was achieved by connecting all courtyards through corridors. Three types of corridors are especially noteworthy. Thus, though the throneroom was the first monumental reception room to be encountered, one did not need to pass through it to reach the rest of the palace. These, however, represent only a small sample of all palace suites.

First, routing in the palaces was dependent on corridors and courtyards. This routing was direct and concentrated along only a few corridors. This facilitated control and made it easy for areas to be closed off if so desired. This will have made the monumentality of the courtyards even more striking. The corridors were located, one could say hidden, in the corners of courtyards and do not seem to have differed architecturally from the smaller entrances into the nearby suites.

The second consequence of this spatial organization was the absence of alternative routes within the palace. Routing was mostly predetermined both within each suite as well as in the palace at large. These characteristics typified the organization of all Late Assyrian royal palaces.

Differences were nonetheless many. It cannot have been easy to combine the conflict- ing requirements of pomp and circumstance, security, tradition, seclusion and practi- cality. 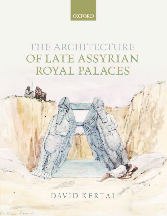 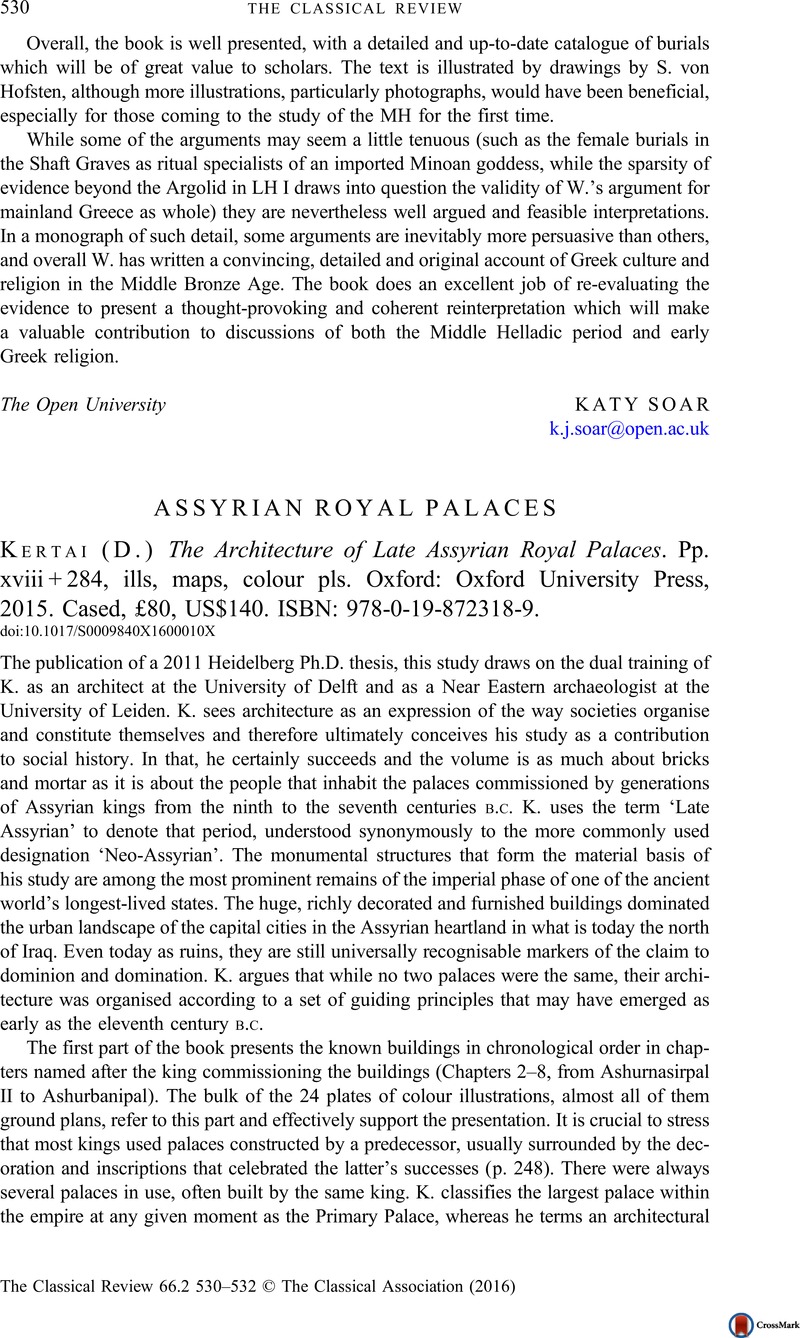